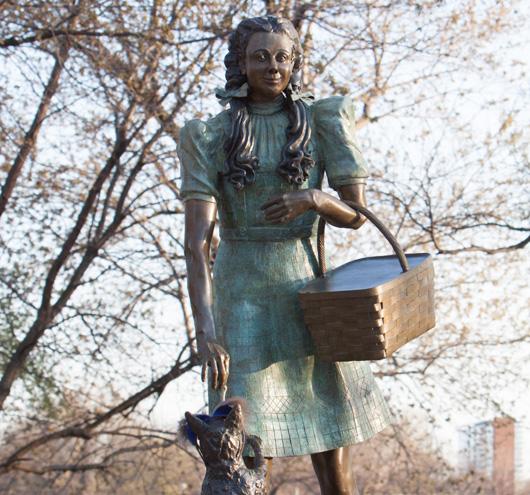 "The Wizard of Oz has been a passion of mine since the age of 3. Being the voice of Dorothy in Oz Park, and sharing that passion with others, is a dream.”

The Dorothy and Toto statue is clearly modeled after Judy Garland and her Cairn terrier from the beloved classic film, The Wizard of Oz. This was the fourth and final sculpture commissioned by the Oz Park Advisory Council.

L. Frank Baum (1856 – 1919), author of more than a dozen Oz books, lived in Chicago in the 1890s. Today, 13-acre Oz Park honors Baum’s connection with Chicago and includes areas such as Dorothy's Playground and the Emerald Garden.

The munchkins admired Dorothy for her instinctive witch-killing know-how. Many generations have valued her courage and good cheer.

As it turned out, her passage home was surprisingly simple. Just three clicks of those red heels…or were they a different color? The famous ruby slippers were created for the 1939 movie to take advantage of the newly-invented Technicolor; in Baum's original books, Dorothy's shoes were actually silver.

For more about artworks in Chicago’s parks, click here.