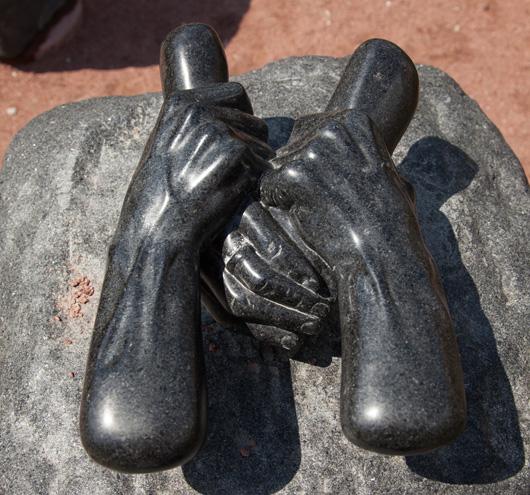 "I think that Jane Addams, who never stopped reaching out, connecting, and helping, would have loved what Louise Bourgeois created in her honor, and also what this sculptor said: ‘I am not what I am, I am what I do with my hands…’”

Type this short URL into the browser of your mobile telephone, in a moment your phone will ring - and you’ll hear what your statue has to say for itself!
Speak2.co/Hand

Her contributions are too numerous to list. Addams and her cadre of social reformers opened Chicago’s first public playground and helped foster the national playground movement. Her efforts led to the creation of the earliest child labor laws and the nation’s first juvenile court system. She advocated for women’s rights, including women’s right to vote. Addams also founded the Women’s International League for Peace and Freedom.

The sculpture was created by artist Louise Bourgeois, then in her eighties. Rather than depicting Jane Addams with a figurative sculpture, Bourgeois created a series of carved black granite hands, representing Addams’ humanity and generosity towards the many people to whom she reached out.

For more about artworks in Chicago’s parks, click here