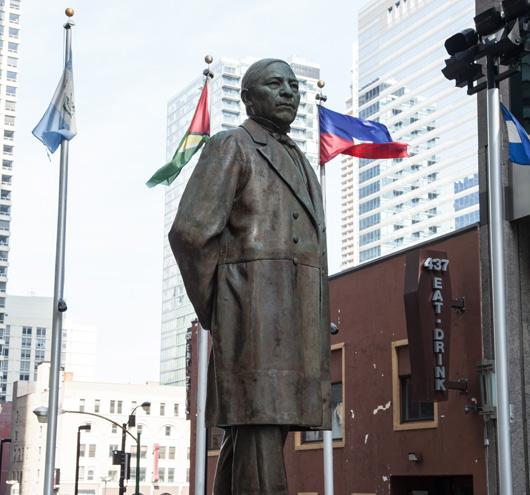 Produced with The Goodman Theatre

Type this short URL into the browser of your mobile telephone, in a moment your phone will ring - and you’ll hear what your statue has to say for itself!
Speak2.co/Benito

Benito Juárez (1806 – 1872) was the first and only indigenous President of Mexico. Known as the builder of modern Mexico, he was committed to restoring the rights of his nation’s indigenous populations.

A Zapotec Indian and national icon, Juárez has been called ‘the Lincoln of Mexico’ because, like Lincoln, Juárez supported the rights and ideals of all men. When Juárez was forced to flee Mexico City in 1858, Lincoln sent him a message of hope ‘for the liberty of your government and its people.’

The Benito Juárez statue stands in a plaza that honors the Latin American cultures represented in Chicago. Today there are towns, schools and roadways throughout the world named in honor of Juárez.

For more about artworks in Chicago’s parks, click here.